Einstein’s Bagels And Why They Apparently Think I’m An Illiterate Putz.

I have a big superego. I freely admit that. I think a person should go out of their way to do the right thing and if something is wrong then you just don’t do it. That doesn’t make life in this culture very easy sometimes.

I am what the gamers, the folks who play Dungeons and Dragons and other role-playing games, call Neutral Good. As a player, that would be my moral alignment. Good, and Evil, come in three flavours—Lawful, Neutral, and Chaotic. Lawful Good follows all the laws. That defines his or her idea of goodness. The means justify the ends, whatever those ends may be. Chaotic good follows no rules but acts on the ideas of outcome only, saying the ends justify the means. Neutral Good is defined this way:

A Neutral Good character is guided by his conscience and typically acts altruistically, without regard for or against Lawful precepts such as rules or tradition. A Neutral Good character has no problems with co-operating with lawful officials, but does not feel beholden to them. In the event that doing the right thing requires the bending or breaking of rules, they do not suffer the same inner conflict that a Lawful Good character would.

When I see a rule being broken, and I think it is a good rule, a law being scoffed, and I think it is a good law, one that makes sense, one that deserves to be followed, I find myself wanting to do something, and that oversized superego means I have no problem doing it. And I’m a fixer. When I see things that aren’t right, I want to fix them. Need to fix them. Even if I’m hungry.

I was up early. Too early, really. At five-fifteen. Why? Because I’m the only one who shows up to Wednesday six a.m. spin class and I don’t want Tammy to lose her income for that class. So I went, even though I hadn’t slept well and even though I had to be back at the gym an hour later to see a string of members for short, introductory sessions of assisted integrated stretching from eight am through six that evening.

Spin class over, I ran home, showered and, after feeding Dusty, let her out. In the meantime I was going to make my own breakfast in my beautiful (and it is) healthy (and it is) lovely (and it sure is) Vitamix. Looking out the kitchen window I notice something. I notice that I don’t notice Dusty. She has leapt the fence again. So much for my salad smoothie. And so much for my coffee.

So much for breakfast. Sure, Dusty gets to eat and play, but I don’t. Off to the gym.

Two hours and six patients later, I’m hungry. I have a break and my blood sugar is low enough that I know for sure I’m headed for a bad choice. Luckily, Einstein’s Bagels is a block away, on Babcock and Palm Bay Road. A salt bagel and coffee. Maybe even some lox.

Without enough time to walk, I get into the truck and drive over. I park and have my Einstein’s cup, my cup about to be filled with free coffee, in my hand. Coffee. Bagel. Salty salty fish. But first, the bathroom.

On my way in, I see the community board. The last time, there was barely anything on it. An announcement or two. And it was neat. Not now.

The fact that I can barely hold it (and why didn’t I go at the gym? Oh, yes, I was hungry and my blood sugar was dropping) doesn’t keep me from staring at the board and noting that most of the things on it are not supposed to be there, according to the big old sign smack in the upper-middle of it all.

OK. Bathroom. Then I can talk to the fellow at the register as I order my bagel and coffee.

“I’d like a salt bagel please. Toasted, and coffee.”

“Anything else?” I look at his name tag. He is the manager. Perfect.

“No thanks. But I wanted to mention that there is a lot of stuff on the community board that doesn’t adhere to the guidelines.”

He looks at me as though I had said, instead, “Excuse me, but there is a dead body in the bathroom and your mom is standing over it with a knife. Oh, and he’s not got pants on.”

Slowly, with a great deal of emphasis on the last word. “What sort of things?”

“Lots of business cards. And political advertising for candidates. I saw that the sign said no advertising and no political campaigning.”

“I’m offended!” He says this as though I had said he mom hadn’t any pants on either. And I am quite well confused. I can’t imagine how I could have offended him.

“No, by you. Everything up there has been approved by management.”

“So, you’re offended? I really can’t imagine how I offended you.”

I’m not going to win this one, so I might as well have at it. “Well, you must be incredibly easily offended. Exactly what offended you?”

“Your suggestion that we did not follow the rules on the community board.”

“That offended you? My, you ARE easily offended. It says clearly no advertising. And no political campaigns.”

“That campaign is a non-partisan race.  And those business cards and advertisements are not for food. It only app

lies if it is for food that competes with us.”

“Come with me, please.” I gave him a follow-me index finger and walked over to the board about four feet away, the order area being at the end of the long counter and just before the short hallway to the bathrooms, halfway down, on the right side off which is the community board. I point out the sign.

“No advertising. It does not qualify that in any way. This is full of advertising. No political campaigns. It doesn’t say unless it is a non-partisan race.” 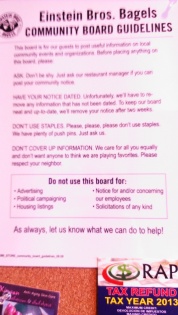 “Well, it means that though. That’s what it means. You know, you could have just asked if you wanted your cards there.”

I cocked my head to the side. The way a puppy does when he’s confused. I find myself doing that quite a bit.

“Now I am offended” It is his turn to look confused. “You are telling me” (and I step very slightly closer to him) “that I am either illiterate or I am a putz!” I take care to pop my P like I’m trying to explode a microphone.

“I would not ask to put up a card because this clearly states no advertising. If I did ask, that would make me illiterate. If I wasn’t illiterate and I asked anyway, I would be assuming you would break the rule just for me and that would make me a putz. So which is it? Am I illiterate or am I a putz? Which one are you accusing me of?”

I walk back to the counter. He follows. Each of us on our proper side.

Grimly, he looks at me and asks, “Did you want anything on your bagel?”

“I’m not handing you any money! I won’t give money to a place that can’t even follow its own rules and has an illiterate manager. And NOW you can be offended, because that one I meant!’

I walked out. To the car. I get my phone. I walk back in, camera on.

He follows me. “I really can’t let you take pictures of this store.”

“Really? People take pictures when they check in on Facebook. There are pictures on Yelp. On your own Facebook page, people upload pictures. And how are you going to stop me?  Afraid some other corporation is going to copy your community board?” I take one picture. “Besides, how else will I spread this great story all over social media without a picture?” I take a close-up of the sign. I smile and walk out.

Back to the gym I go. I’m still hungry. But I know the bagels are no good for me anyway and now I certainly won’t be having any. Not today. Not tomorrow. Not soon, unless they are really really good ones.

No matter. Right is right.

But I sure could have used some coffee.

Posted by Adamus on January 24, 2014 in Culture, Education, Food, Social 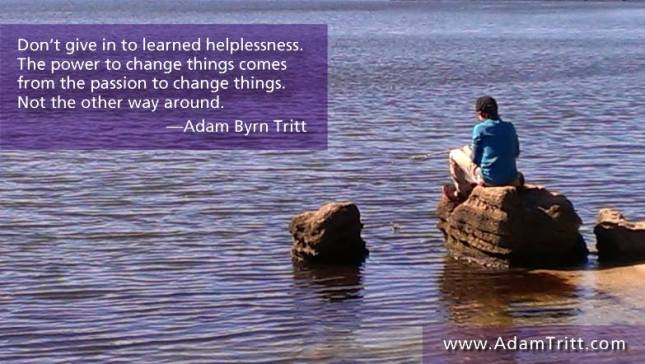 Prompted by the movie Blackfish and the very heartfelt question of a young lady.

And thank you, as always, to Craig Smith for the design. And thank you to Arlene Gorgone for the movie and G!G! for the inspiration.

Words and photograph by me. Photo taken at Castaway Point in Palm Bay, Florida, along the Indian River.

Posted by Adamus on January 8, 2014 in Uncategorized

There are still tears
For you, around corners
I have avoided, nested into objects
Unexpected, curled up in words.
They well under memories
Until released, into the open,
Jostled by a stray scent,
Nudged by a colour,
A page of a book,
A wind in leaves.