A Note about Being "Carried Away"

I have recently started putting together a Really Really Free Market; The Free Market of Melbourne and Palm Bay, Florida.

What that is isn’t the point now. If you like, you can look that up at the RRFM Blog

It has met with such acceptance and joy that person after person has jumped on to help. Things ae being taken care of even before I know the need has arisen.

So we are all getting the word out. In large part to let people know this is not a virtual market, but a real location with real people. At long last, hightech is helping create hightouch.

Ah, but someone has taken exception. In my long practice of posting interesting emails and replies, I post this for you, from the woman who wants to make sure I don’t get carried away.

An Email from a yahoogroup that did not like me posting the RRFM: Crossposted from The Blog of the Melbourne and Palm Bay, Florida, Really Really Free market.

Lots of folks wrote me asking if they could post their cats and stoves and such. People don’t seem to realize we are talking about a real location with real people.

It is amazing and wonderful that our technology that, for so long, created distance, was hightech and lowtouch, now is assisting us to connect in ways that creates hightech and hightouch. Facebook, Yahoogroups, local networking.

Here is a lady, the “owner” of Soughbrevardbargains@yahoogroups.com, who takes exception to our getting the word out. The emails are in their entirety.

I don’t mind a group etc. being advertised on south brevard bargains, but I don’t want them being advertised all the time. Only advertise your group “once” (already done) then put it in the links section on the group home page. you have been getting carried away with advertising this “free market” thing, & it’s just getting to be too much. I hope you understand.

I actually only advertises the group once. I mentioned the blog once.

Carried away? We are creating an actual space for trading of goods and services. Realtime. Real people getting what they need.

With in the last week you have advertised that group or whatever it is, at least 4 times. I know, because I just deleted all 4 of them except one.
Yes carried away.

(Added note by me: this was over the course of two weeks.)

Here is my reply to this last:

Do forgive me for attempting to set up a real thing with real people. You keep your e-group. It’s the folks who get “carried away” who accomplish things, not those content with good enough and ok.

You’d probably have told Bill Gates and Steve Jobs they were getting carried away. Of John Audubon. Newton was carried away. Nearly anyone who has ever won a race for elected office had to get “carried away.” Anyone who makes a real, consistent difference was “carried away.” When I want to stop being a successful author and educator and stop making a real difference in he world, then I’ll take your advice and stop getting “carried away.” Then I, too, can be common and ordinary.

In the meantime, I’ll get a bit more carried away by posting this on my blogs.
Thanks for the great copy. I couldn’t have written this without you.

And, of course, I could not have.

I saw myself this morning. After weeks, in the sidewalk, shards of mirror, broken, here and there scattered, my image in each, beneath the surface, growing larger as I approach, under my feet, small, gone as I pass. Or so I presume. Perhaps each watched as I walked on. Perhaps each wondered, separately, who I was. It would not surprise me.

Looking down, I was startled to see myself looking up from the ground. I have passed mirrors on occasion, noticed the face, thought, quickly, not bad, realized the face was my own, regretted the thought. Wondered how it could happen, what would have caused such as mistake. To not recognize myself is bad enough but to think I actually looked decent, better than decent, is what I have the problem with. And to think so only when I do not know it’s me. Yes, there is something sad about this. You don’t have to tell me.

It has been some weeks since I have looked in a mirror. Weeks. I approach the ones in the bathroom and, as I get close enough to see, my eyes close before I realize I have closed them. I needn’t see to comb my hair, to shave. I don’t even turn the lights on. No need. I know where everything is, I don’t have my glasses on, nothing to see here.

If I must look, I find myself standing aside. Aside from my own self. I have somehow learned to position myself so my hair is visible in the full-length mirror, but nothing else. Often it seems to have been combed while I am laying on an incline. I don’t care. Really. I’ll comb it later.

“Why do you do that?” My wife asks me this all the time. I scrunch close up to the mirror, eyes closed. If you could not see my closed eyes in the reflection it might appear I was nearsighted. I can’t answer her question. I don’t know.

Tomorrow I will not look down as I walk.

Normally, my day would start at eight in the morning. I would often arrive early just so I could get some filing done, have some time to play on the computer, take a short walk and, for the most part, get nearly all of my work for the day done well prior to the first client showing up for their eight o’clock appointment. In this way my days were relatively easy and taken up with writing, listening to books on tape and bouncing a solid rubber ball incessantly against the wall. The only difficult part was actually seeing the clients (some of them were joys, really but, some were anything but) and dealing with the other workers and administration (never, ever a joy).

Today, however, I wanted to get there extra early. I started my day at home, in my small closet-office, sitting in front of my hobbled and cobbled computer with Publisher opened. Once I had finished my work with Publisher I got out my Exacto knife, cutting mat, straight edge and whiteout and went to work to further doctor the reason I was so much looking forward to getting to the office early on this one particular day. Today was going to be double foodstamp day.

My backpack on me, me on my black 86′ Honda Elite 250 and all of us on the road for the 5 miles to the office. The sun was not up, but the mist was, rising to obscure the road and cover my visor as I rode through the early October predawn.

Parking my bike in front of building D, I entered. Seldom was the building so silent. Wending down the hallway to my own personal 3×5, I dropped my backpack on the desk, unzipped it and pulled out a manila file folder and headed to the copy machine. Placing my creation on the glass, I made one copy. One copy only. If I did this right, one copy would be enough.

I placed the original Publisher/cut and paste model back in the folder, returned the folder to my backpack, took a thumbtack from my desk and headed back outside. Out of the front door, to the left, around the side of the building to where, in the next twenty minutes, lines would start to form. It was Tuesday and this was the first foodstamp pickup day of the month. I fully expected this day would not go as smoothly as they anticipated.

The door was locked and, while, when I arrived, my bike was the only vehicle in the lot, there were now more than a few cars, and all there was for me to do was to act as naturally and obviously as possible as I went to a locked door in an area I never visit earlier than I normally arrive while holding a sheet of paper and a tack.

Asimov, in the first Foundation book, in the character of Salvor Hardin, stated “obviousness is the best mode of concealment.” I took my thumbtack and did my best approximation of Martin Luther. With sweeping, quick and sure movements, I tacked at eye-level a sign stating today was double foodstamp day. All you have to do, the sign instructed, was to look at your cashier and say, “double double my food stamps please.” 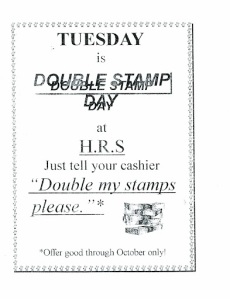 The folks inside the foodstamp office would never know it was there. The door was always unlocked from the inside after the books of stamps were counted. In fifteen minutes clients would start to arrive for pickup and ask for double food stamps. It was 7:15. Time to head inside, roll up my sleeves and look busy.

Back in my office I checked the day’s appointments, printed out the schedule, threw away the memos I had grabbed as I passed my mailbox, put the few files together which I had not yet properly compiled, turned on my radio and put my feet up on the desk. My first appointment had not yet arrived and I had nothing to do.

7:32 came and I received a call that my eight o’clock was early. Excellent. I gathered the few papers I would need, placed them in order on my desk, and went out to get her. While in the lobby I saw there was a bit of a commotion. BeeBee, the building supervisor, the head of the Foodstamp, AFDC and Medicaid program for our area, was talking to a few clients. I called my client and headed back to my office to start the interview.

Under the sign above my door quoting John Ciardi from his poem, “In Place of a Curse” we passed. “Beware the calculations of the meek, who gambled nothing,/gave nothing, and could never receive enough.” I sat in my desk and placed her beside me. All the other workers sat their clients across from them separated by their desk. I took the more egalitarian position which allowed them to see the computer as we input their data and also allowed them to see the sign above it, a quote from Baruch De Spinoza. “In the receipt of benefits and in returning thanks, care altogether must be taken.” Above that a sign stating “Bad planning on your part does not necessarily constitute an automatic emergency on my part.” Lamont Cranston, The Shadow, stood on my computer. When I knew a client was lying, perhaps about a father supposedly not in the house or about a job supposedly not had, I would squeeze a bulb under my desk and The Shadow would raise his cape over his eyes. “Lamont says you are lying. Would you care to rethink what you just said?” Behind them a framed portrait of Daffy Duck, God of Frustration. From the ceiling hung a large rubber chicken.

A few minutes into the interview I heard sirens. I wouldn’t normally get up to see what the sirens were about and I did not get up then, just continued the interview. A few minutes later a worker came into my office to tell me there was apparently a riot at the pickup door and clients jamming the waiting room insisting they speak with supervisors. The police were there and handing out food stamps had been suspended. They were not sure what the problem was, but people seemed to be demanding double their food stamps and no one could quite figure out why.

It was barely 8 o’clock. Sometimes it’s just worth it to come into work a little early to get something done.